1908: Passing of BC University Act

UBC engaged in extension activities (non-credit, off-campus activities), in order to serve communities in British Columbia, outside of Vancouver. The University was involved in three main extension activities: soldiers were given vocational training after the First World War; courses were provided to BC farmers to disseminate agricultural information; and lectures were given by faculty members throughout the province as organized by the Extension Lectures Committee.

Extra-mural courses were courses offered outside regular school hours including night and summer classes. The Extension Lectures Committee took over the responsibility managing these courses. 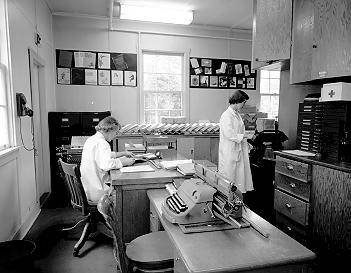 As part of its mission to promote “the advancement and diffusion of knowledge and understanding,” the Carnegie Corporation of New York donates $50,000 ($764,000 in 2009) to enhance the education of the people’s of BC. It helped established the Department of University Extension with Robert English becoming its first director. Directed reading courses were then developed for adults seeking non-credit vocational/professional development.

1942: Introduction of the rural film circuits to BC communities

As a collaborative effort with the National Film Board, the UBC Department of University Extension introduced the rural film circuits. It was the first introduction of technology to improve access and educational opportunities to rural BC communities. 1

1949: Introduction of the first correspondence courses at UBC

UBC introduces the first correspondence courses administered by the Department of University Extension. These were credit courses under the Faculty of Arts.

The Canadian Broadcasting Corporation (CBC), the Department of University Extension, the BC Parent-Teacher Federation, and the Community Arts Council of Greater Vancouver collaborate on the first television workshop with the theme “the effects of TV on modern life.”

1957: UBC offers first program on the operation and use of digital computers

The Department of University Extension spearheads the first introduction program on the operation and use of digital computers. UBC’s first computer, the ALWAC II-E digital computer, was installed on campus and used for class demonstration and practice.

1970: The Centre of Continuing Education is established

A University Senate Committee on Continuing Education recommended that all extension programs be administered centrally for a more integrated approach to continuing education. The Centre of Continuing Education takes over the Department of Extension. In cooperation with faculties, the Centre starts to develop and offer a variety of part-time degree, professional development, and general interest programs.

Credit and Independent Studies (CIS) is created to be responsible for offering both credit and non-credit correspondence courses to learners outside the Lower Mainland.

1974: BC provincial government gives its first grant to distance learning

The BC provincial government gives a grant to UBC for developing distance learning courses. It resulted in increasing the number of courses offered from 18 in 1974 to 43 in 1977. 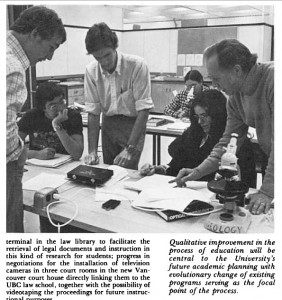 1976 was a year of milestones for distance learning. UBC launched a program of independent study via television, the first of its kind in the province. Fine Arts 125: From the Pyramids to Picasso was the first course to be offered on television. It was also the first to rely heavily on non-print media. Enrolments in distance learning reach a record of 1001 students, and the Faculty of Science offers its first distance course.

Coined by artists from UBC’s Audiovisual Services, the term UBC Access provided a sense of cohesion between the different distance learning programs.

UBC offered its first online courses in 1995, earlier than most other institutions. Online learning was the impetus for change from one-way ‘broadcast’ learning to two-way ‘communicative interaction.’

UBC Senior Computer Science instructor Murray Goldberg develops World Wide Web Course Tools, better known as WebCT, a web-based learning environment. This early version of the course management system was designed to create a sense of community similar to a virtual classroom. This invention changed the face of learning, not just at UBC, but worldwide; in 1998 it was the world leader in online teaching, used by about two million students in more than 800 universities and colleges in 42 countries. At the same time, UBC Access was renamed Distance Education and Technology (DE & T), highlighting the innovative application of emerging technologies in distance learning courses.

As UBC decided to separate DE & T from Continuing Studies, the Office of Learning Technology (OLT) was established as recommended by the Academic Committee for the Creative use of Learning Technologies (ACCULT) report. OLT became well recognized on campus for collaborating on educationally-focused technology projects, advocating for constructive action on campus-wide interests and issues involving learning and teaching with technology, and supporting and coordinating professional development activities and events on behalf of UBC’s learning technology community.

UBC offers its first two graduate programs completely at a distance: Masters of Educational Technology (MET) and Adult Learning Global Careers (ALGC). Both programs reach students from around the world.

Recognizing the synergies between DE & T and OLT, UBC merges both organizations to create the new Office of Learning Technology. The merged OLT, with its vision of “Bridging the Distance,” focuses on partnering with Faculties and service units to support innovations and improvements to UBC’s learning environment that are enriched and supported with technology.

Marked by several events throughout the year, UBC celebrates 60 years of distance learning at UBC.

Established in July 2010, the Centre for Teaching, Learning and Technology (CTLT) builds on the collaborative and high quality programming legacy of its predecessor centres, the Centre for Teaching and Academic Growth (TAG) and the Office of Learning Technology (OLT) and integrates a re-configured Institute for the Scholarship of Teaching and Learning. CTLT collaborates with academic and administrative units throughout UBC in order to advance the scholarly practice within the UBC teaching community while supporting technology-enabled learning environments and distance learning opportunities.

* Source: Unless otherwise linked, information is from the UBC Archives.